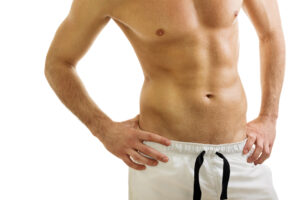 Men often have resistant fat deposits in highly targeted areas such as the abdomen and flanks. These are areas with thick, highly elastic skin that responds very well to liposuction. Liposuction can be used in a male plastic surgery procedure and can also help define certain muscle groups such as the abdominal “six pack,” serratus striations, and pectoralis borders. For men that have excess breast tissue, liposuction can also be very effective, simple, and well tolerated.

The most common liposuction procedure is known as the tumescent technique. Tumescent liposuction differs from the original liposuction technique in that fluid and anesthetic is injected into the area that causes the fat to become ‘tumescent,’ or swollen, allowing the surgeon to more easily remove the tissue.

Do I Need Liposuction?

Because liposuction is such a common and popular procedure some people have begun to think of it as a weight loss solution. This, however, is not the case. Good candidates for liposuction are healthy and at a stable body weight. They are not obese, and are basically in good shape. Individuals who undergo liposuction share some of following characteristics:

I wanted to thank you for helping me achieve my ‘new look’. I appreciate your patience and thoroughness, and especially that you understood my objectives and delivered the exact results I was looking for.
– C.D.

Tumescent liposuction will usually take place in either in Dr. Goldberg’s outpatient center or hospital. The surgery by itself can take 45 minutes to two hours. Local anesthesia and intravenous sedation are usually used for minor procedures, and general anesthesia for major procedures.

Once the anesthesia has been administered, Dr. Neal Goldberg will make small incisions near the target areas. Next, the tumescent solution containing diluted lidocaine is injected into the area. A cannula (thin tube) is then used to break up, or dislodge the fat. Tumescent liposuction cannulae are even thinner than those in other liposuction approaches, and the incisions made are also smaller. The fat is suctioned out through a plastic tube with the assistance of a high-pressure vacuum mechanism.

Having plastic surgery isn’t a copout or a sign that someone is vain. It’s about getting your mojo back and feeling good about how you look.
– Dr. Goldberg

What Can I Expect After Liposuction?

You can expect to be somewhat sore after the surgery. Numbness, burning, and swelling are common post-operative effects. Dr. Goldberg will probably advise you to walk around shortly after procedure. After two days, the small drainage tube that was inserted beneath the skin to prevent fluid build-up is removed. Dr. Goldberg will likely recommend that you continue to wear the elastic compression garment for about 2-3 weeks. Additional liposuction treatments may be recommended as only a certain amount of fat can be removed during one procedure.

Dr. Goldberg treats patients from all over the state. For more information about liposuction, call our office for a consultation at 914-840-5999.

Ready To Meet With Dr. Goldberg?