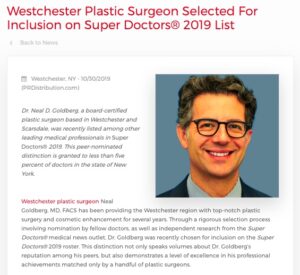 Dr. Neal D. Goldberg, a board-certified plastic surgeon based in Westchester and Scarsdale, was recently listed among other leading medical professionals in Super Doctors® 2019. This peer-nominated distinction is granted to less than five percent of doctors in the state of New York.

Westchester, NY — Westchester plastic surgeon Neal Goldberg, MD, FACS has been providing the Westchester region with top-notch plastic surgery and cosmetic enhancement for several years. Through a rigorous selection process involving nomination by fellow doctors, as well as independent research from the Super Doctors® medical news outlet, Dr. Goldberg was recently chosen for inclusion on the Super Doctors® 2019 roster. This distinction not only speaks volumes about Dr. Goldberg’s reputation among his peers, but also demonstrates a level of excellence in his professional achievements matched only by a handful of plastic surgeons.

Super Doctors® is a respected publication dedicated to identifying healthcare professionals at the top of their field across 40 different medical subspecialties. Choosing appointees to the Super Doctors® list is a meticulous task, with nominations merely acting as the first stage of the multi-step selection process. From the peer-submitted nominations, a panel of independent researchers then evaluates each candidate’s professional achievements by factors such as previous honors and awards, years of experience, hospital affiliations, fellowships, and leadership positions, among other indicators. A separate panel then reviews the highest-scoring doctors and narrows the pool of candidates to a select few for inclusion in Super Doctors®.

While Dr. Goldberg’s recognitions include the “Patients’ Choice” and “Compassionate Doctor”awards by patient-reviewing platforms like Vitals®, Dr. Goldberg’s standing on the Super Doctors® list stands out as an honor made possible only through nominations by fellow doctors who chose him, specifically, as their go-to surgeon if they required plastic surgery care. As the sole plastic surgeon from the Scarsdale region to be included in the Super Doctors® 2019 publication, Dr. Goldberg is humbled to have been recognized by the Westchester community in such a profound way. He looks forward to continue providing first-rate service and an unparalleled quality of care for individuals seeking to achieve their aesthetic goals.

« Back to Blog
Specials
x